Saturday 5th September 2015, commencing at 1315 hours will be the Monthly Business Meeting.

NOTE: Contest is always on the last FULL weekend of August.

ELIGIBILITY: All licensed operators throughout the world are invited to participate.

OBJECT: To encourage YLs in the use of amateur radio. YLs work everyone; OMs work YLs

The following are suggested frequencies for easier location of contacts: 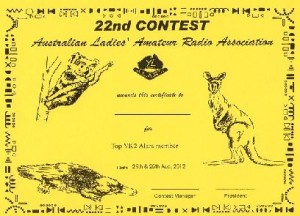 Paper and electronics logs both welcome.

LOGS MUST BE SIGNED.

Logs must be received by the Contest Manager by: 30th September, 2015

Announced on 25 August, a tight program of changes to legislation and regulations will be carried out over the next two years, commencing in October and running through to mid-2017, when the new regime is intended to start.

A single licensing system is the principal feature of what the Government is calling the “new spectrum framework”. The current apparatus, class and spectrum licensing regimes will disappear, to be replaced with licences that set out the conditions of use for spectrum access detailed in a set of key parameters.

Known as parameters-based licences, the core parameters to be included in a licence will be set out in the proposed new radiocommunications act, with the detail on these parameters to be developed by the ACMA in consultation with users and set out in subordinate instruments. The Spectrum Review recommended that likely core parameters might include frequencies, geographical details, rights to renewal, terms for variation or revocation, together with price and payment methods.

Broadcasters, commercial, defence and other government users, scientific, aeronautical, maritime, private, amateur and other not-for-profit users, as well as type-approved wireless devices, will all be affected by the new spectrum framework.

A review of pricing for spectrum access is to commence immediately and continue until mid-2016. The government foreshadows new pricing arrangements will commence in mid-2017, along with the start of the new licensing system. The next federal election may be held sometime between late-2016 to early-2017

The Minister for Communications’ media release is here. Link

The Department of Communications’ implementation timetable can be found here. Link

The commemorative callsign VI0ANZAC is planned to be activated at Casey Base and join the Wireless Institute of Australia ANZAC 100 program.

This is to mark the 100 years since the ANZAC or Australian and New Zealand Army Corps first fought at Gallipoli in Turkey during WWI.

VI0ANZAC will be on the air this weekend – weather permitting

For a schedule and the latest check out qrz.com and the WIA website VI0ANZAC roster page via this Link

5. Send your name to Mars

Mars enthusiasts around the world can participate in NASA’s journey to Mars by adding their names to a silicon microchip headed to the Red Planet aboard NASA’s InSight Mars lander, scheduled to launch next year.

“Our next step in the journey to Mars is another fantastic mission to the surface,” said Jim Green, director of planetary science at NASA Headquarters in Washington. “By participating in this opportunity to send your name aboard InSight to the Red Planet, you’re showing that you’re part of that journey and the future of space exploration.”

Submissions will be accepted until Sept. 8. To send your name to Mars aboard InSight, go to: http://go.usa.gov/3Aj3G

The fly-your-name opportunity comes with “frequent flier” points to reflect an individual’s personal participation in NASA’s journey to Mars, which will span multiple missions and multiple decades. The InSight mission offers the second such opportunity for space exploration fans to collect points by flying their names aboard a NASA mission, with more opportunities to follow.

Last December, the names of 1.38 million people flew on a chip aboard the first flight of NASA’s Orion spacecraft, which will carry astronauts to deep space destinations including Mars and an asteroid. After InSight, the next opportunity to earn frequent flier points will be NASA’s Exploration Mission-1, the first planned test flight bringing together the Space Launch System rocket and Orion capsule in preparation for human missions to Mars and beyond.

InSight will launch from Vandenberg Air Force Base, California in March 2016 and land on Mars Sept. 28, 2016. The mission is the first dedicated to the investigation of the deep interior of the planet. It will place the first seismometer directly on the surface of Mars to measure Martian quakes and use seismic waves to learn about the planet’s interior. It also will deploy a self-hammering heat probe that will burrow deeper into the ground than any previous device on the Red Planet. These and other InSight investigations will improve our understanding about the formation and evolution of all rocky planets, including Earth.

For additional information about the InSight mission, visit:
http://www.nasa.gov/mission_pages/insight/main/index.html

DV4mini is a tiny but powerful USB stick that can change any PC into a HOTSPOT for the modes D-Star and DMR (C4FM Fusion is being prepared). It contains a powerful 32-bit micro controller as well as a complete 70cm transceiver and modulator/demodulator for GMSK and 4FSK (including raised cosine) as well as a USB interface. It does not require its own power supply as it is powered through the USB interface. Thanks to a power saving voltage transformer even older USB interfaces will suffice. It will be shipped with a comprehensive but simple to use software package which allows for the linking with DCS reflectors for both D-Star and DMR reflectors.

For Digital Voice enthusiasts: your handheld radio is no longer gathering dust. This hotspot brings the D–Star or DMR reflector directly into your shack.

For DV Power Users: It is possible to plug several of these sticks into a PC, thus allowing simultaneous operation with several reflectors (even D-Star and DMR mixed). Well if you so desire you can fully use all your USB sockets with DV4minis and create a DV Center that way.

For home brewers: the DV4mini runs well on single board computers e.g. Raspberry, BananaPi, Odroid etc.The minimum requirement is a Dual-Core. Such a hotspot would only need a few Watts and be useable in continuous service.

For vacationers: due to the tiny size it can be brought with you on your vacation and thus create a hotspot in your hotel.

DV4mini Library (in C) licensed under GPL 3.0,  includes all functions required to run the DV4mini hardware allowing you to create your own projects.

The Software and Firmware can be downloaded here

The Manual is here

A look back at events that made history this week – compiled by the Summerland Amateur Radio Club of Lismore, NSW

55-BC Roman forces under Julius Ceasar invade Britain.
1609 Galileo demonstrates his first telescope to Venetian lawmakers
1831 Michael Faraday demonstrated the first electrical transformer.
1884 First known photograph of a tornado is made near Howard, SD
1885 Gottlieb Daimler receives German patent for a motorcycle.
1907 The Bréguet-Richet Gyroplane No. 1 made what is generally accepted as the first vertical flight, hovering about 2 feet (0.6 meters) off the ground.
1913 Lt Peter Nestrov, of Imperial Russian Air Service, performs a loop in a monoplane at Kiev. (first aerobatic maneuver in an airplane)
1939 Erich Warsitz makes first jet-propelled flight (in a Heinkel He-178)

The Kariong antennas have been damaged and are being repaired.