Saturday 17th October 2015, commencing at 1310 hours will be the CCARC Business Meeting.

This is dependent upon the number of people interested in getting or upgrading their qualifications, so if you’ve thought about, but haven’t done anything about it, now’s the time!

If you know someone who’s interested in getting their license, let them know

This training is done on an “on demand” basis – no demand, no training – no training, no hobby!

Prospective radio amateurs and those looking at their callsign choices are now able to do that online at the “Public List Of Available Callsigns” on the WIA website. Link

This follows the resolution of teething problems with the ACMA’s new SPECTRA system.

All callsign information can be found via the following Link

4. Danger ! A no-fee Amateur licence fee could mean no service

The WIA Board has become aware of a campaign, circulated by email, to lobby the new Minister for Communications to “review the pricing of amateur radio licences, to bring them into line with other countries”. WIA Director Roger Harrison VK2ZRH has responded to the proponents of this lobbying campaign, who are asking the Minister to direct the ACMA to drop Australian amateur licence fees to zero.

The campaign suggests writing a personal letter to the Minister in your own words, arguing that amateur radio’s past and possible role in disaster communications deserves to be valued, as it is in “many countries of the world”, then citing the three examples (US, UK and New Zealand), along with the argument that a large number of Australian amateurs are pensioners, for whom “the annual licence fee has seen some simply abandon their hobby due to the cost, and to the detriment of the nation”.

At first blush, said Roger VK2ZRH, the proponents of this lobbying campaign seem to have the interests of Australian radio amateurs at heart, particularly those living on a pension. So, when Senator the Honourable Mitch Fifield, the Minister for Communications, receives a letter along the lines advocated, an advisor in his office will likely ask one of the Departmental Liaison Officers what it’s all about, VK2ZRH explains. The DLO will be able to tell the Minister’s advisor that the ACMA already reduced the amateur licence annual renewal fee in April this year, from $75 to $51. The Minister’s advisor might also be told that amateur radio isn’t exactly a low-cost hobby, like stamp collecting, when even second-hand amateur transceivers sell for prices between $250 to $2000, and many new transceivers are priced from $2000 to over $10,000.

While well-meaning, a lobbying campaign along the lines being advocated is unlikely to make much of an impression within the Minister’s office, says VK2ZRH, let alone with the Minister. And not for the two reasons just highlighted. At this point, Roger VK2ZRH explains that his day job for the past 15 years has involved dealing with correspondence to ministers . . . composing, editing and coordinating responses to letters from the public, other politicians, companies and all sorts of stakeholders.

With many years of experience in dealing with ministerial correspondence, Roger VK2ZRH said that, each letter for the minister to sign in response is accompanied by a briefing note, setting out the background to whatever issue or issues an author has written about, and justifying the content of the letter the minister might sign. Writing to government ministers is a huge industry in voter land. Government departments have special units that compose responses for their ministers to sign; sometimes a minister’s office will ask the department to respond instead of the minister.

Before entering the world of ministerial correspondence, Roger VK2ZRH was involved with various lobbying groups attempting to influence the policies or decisions of ministers and governments. Not always successfully, he says. A prime lesson learnt was the need to do the homework on the subject – know as much as possible about government and political processes, the how and why of things. Some homework, he suggests, is needed about why we pay amateur licence fees in Australia and why the arguments being advocated by the current lobbyists are not likely to succeed.

In Australia, it is government policy that all spectrum users pay a tax for the use of spectrum – even defence; that is, the armed forces.Spectrum is a resource. The resource is a public good. It isn’t consumed when used, as minerals are, for example. There is a cost for “looking after” the public interest in the use of spectrum. Use of it is allocated and regulated by a complex set of arrangements, arising from both local and international inputs. As you would be aware, the ACMA has a large role here.

However, the ACMA does not set the fees. This is done by a combination of the Department of Communications, the Department of Finance and the ACMA. The ACMA is responsible for the administrative component of the fees that funds spectrum planning and monitoring, regulatory investigations and the like, along with ITU and World Radiocommunications Conference activities, plus the costs associated with management of the licensing data and issuing of licences. The Amateur Service pays its way, along with everyone else.

To introduce a no-fee amateur licence risks a much lower – or no – service from the ACMA, explains Roger VK2ZRH. Arguing to drop amateur licence fees based on amateur radio’s role in emergency communications – “when all else fails” – no longer has traction in the halls of government in Australia.

Amateur involvement in community service may get some recognition, given the significant number of sporting-type activities that rely on amateur radio for safety communications. But not enough to justify a no-fee licence on the basis of volunteer activities. Citing the licence fee situation in other countries will not hold water as the argument does not compare like-with-like in terms of political and government policy, processes and spectrum regulation regimes.

So three countries have no amateur licence fees – what about the other 150-odd countries that allow amateur radio operation and charge licence fees?
Someone in the Minister’s office is likely to ask that question. What answer is there to that?The NZART has told the WIA that they and many radio amateurs in New Zealand regret the introduction of the no-fee licence there.

Here, amateur radio gets a seat at the table when it comes to negotiating changes in legislation and regulations – locally and internationally. Over the years, the Australian radio amateur community has benefitted as a result, Roger VK2ZRH explains.

Do you want to give that up for the sake of a fee-free licence, he asks?

Held every October are the Oceania DX Contests – first this weekend is the Phone Contest, and on the following weekend CW. The latest reports of sunspot numbers indicate that suitable propagation should exist this weekend.

The Oceania DX Contests are co-sponsored by the Wireless Institute of Australia and the New Zealand Association of Radio Transmitters – and managed by a committee of VK and ZL contesters. It has been around since the mid-1930s, was previously called as the VK/ZL Contest, and the VK/ZL/O Contest. At one stage, reflecting then on poor participation, the VK/ZL/O was to end. That proposal was discussed, put the vote, and the WIA Federal Council soundly rejected its demise.

After further promotion, it was renamed 15 years ago to increase participation and focus on the entire Oceania Region. One avid contester describes the Oceania DX Contest as a time when the whole world points their beam antennas and listens to Oceania for 24 hours.

The Phone Contest starts on Saturday October 3, and the CW Contest is Saturday October 10, with all logs due by October 31. As always, please study the rules and requirements, available on the WIA website.
(Jim Linton VK3PC)

The Remembrance Day Contest Manager, Alan Shannon VK4SN, reports that by now the certificates for the top 3 section winners have been sent to the lucky winners. The WIA prints and sends out the handsome paper certificates printed on special parchment paper for the 1st, 2nd, and 3rd place-getters of each section. 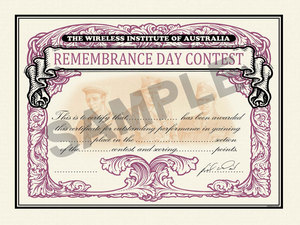 These certificates would have been a good surprise, and many now adorn shacks, prior to the release of the actual participant rankings. A full list of participants and their placings is now available for download on the RD page of the WIA website. As is tradition, November Amateur Radio magazine will announce the overall winning state, along with a few words from Alan VK4SN the RD Contest Manager. Once the edition of Amateur Radio is released, a 16 page report that also contains statistics, records, soapbox comments, and pictures, will also be available as a WIA website download.

Alan VK4SN expresses thanks to all contest participants and those who submitted pictures for the report.

The Kariong antennas have been damaged and are being repaired.